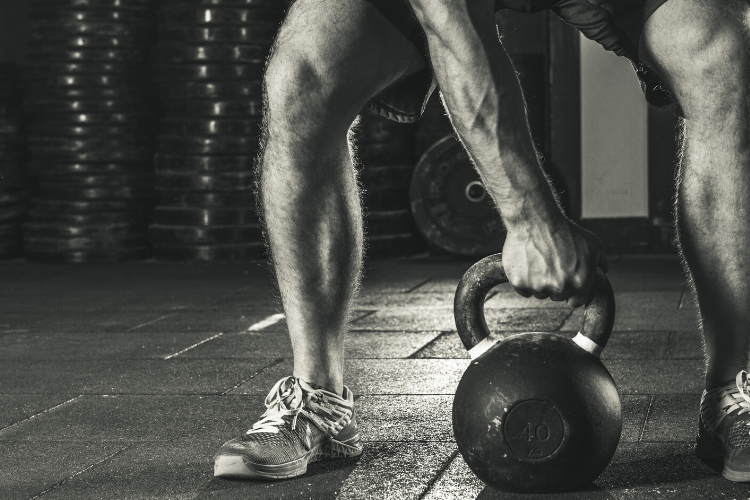 Kettlebells are one of the most versatile pieces of fitness equipment you’ll find in a gym. From renegade rows to kettlebell deadlifts, you name it. You can perform most exercises using them. Kettlebells start from very light to very heavy, so they’re a great way of adding a progressive overload to your fitness regime.

What are kettlebell deadlifts?

Also, you don’t need a gym, and you can do them at home! If you are short for time and can’t always get to the gym, a kettlebell is an answer. Doing a few sets of heavy deadlifts combined with kettlebell swings and gorilla rows is a great fat-burning exercise!

To achieve a Kettlebell deadlift, pick a weigh comfortable weight. Start stood up with your legs roughly shoulder-width apart and put the kettlebell between your toes. As you would for a regular deadlift, bend your knees slightly, keep your chest upright, brace the core and bring your hips backwards. You will find yourself nearly in the seated position in reaching distance from the kettlebell. Remember, this is not a squat; you shouldn’t be squatting to pick up the weight. Keep the armpits closed with your arms straight and grab the kettlebell. Now with your core braced, chest upright, back flat, push the floor away from you and drive the hips forward. Doing this will result in the standing position with the kettlebell hanging in front of you. To put the kettlebell down again, repeat the first instruction before you picked it up.

Here are some notable variations to make your workout that little bit spicier. If you’re new to kettlebell deadlifts, it might be worth nailing the initial technique before you move on to the variations. As always, start with a comfortable weight and increase the load over time.

The sumo deadlift is similar to the regular kettlebell deadlift, but your stance is a lot wider. Think of a sumo wrestler as they’re about to start their wrestle. That’s the stance you’re trying to achieve.

The name gives it away. Instead of holding the kettlebell with both hands, the kettlebell will be to one side of you, like you’re carrying a suitcase. Adding this variation will challenge your core stability.

Instead of deadlifting a kettlebell with both hands, this exercise only requires the one hand. Follow the initial instructions, but keep one arm by your side and the other pulls the kettlebell. A great way of adding variety to your workout!

This one is a challenge and designed to increase the demands on your legs and glutes. Find yourself two shallow boxes or weight plates and set them up the same width as your sumo stance. Put the kettlebell between them. Stand on the boxes/plates and perform the sumo deadlift. You will find this exercise will test your glute, hamstring and leg strength. Good luck with the stairs the following morning!

Try these out and see how you get on. As you have read, the kettlebell is versatile and can be used in many workouts. A kettlebell is an excellent piece of equipment to have at home, meaning you can get your deadlift fix at any time of the day! Remember, it’s always recommended to follow professional advice when performing an exercise. Please don’t injure yourself.